Born in the Bronx New York, October 22, 1946, Robert Benedetto began making his first archtop guitar in 1968 shortly after being discharged from four years of military service. His family includes no less than three generations of woodworking craftsmen. His father and grandfather were master cabinetmakers; his uncles were gifted musicians and artists. Benedetto  began playing the guitar professionally by age 13, acquiring both an “ear” for a good instrument and deepening his love for archtop guitars. Regular gigs in northern New Jersey provided the basis for his celebrated rapport with other guitar players.

Living nearby the busy New York/New Jersey jazz guitar scene during his early guitarmaking years, he did repair/restoration work for many local players, while continuing to make guitars. This allowed him 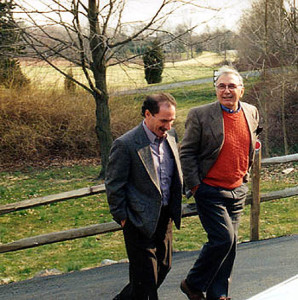 countless opportunities to closely examine old NY Epiphones, Gibsons, and D’Angelicos. In those early years, he cut up much of the family furniture to make his own guitars. As a professional player at the same time, Benedetto became acquainted with several great guitarists and from them learned many subtle refinements for making the archtop guitar. Benedetto’s reputation grew as he began crafting instruments for noted players including Chuck Wayne, Bucky Pizzarelli, Cal Collins, Jimmy Bruno, Howard Alden, Joe Diorio, Kenny Burrell, Pat Martino and many others. 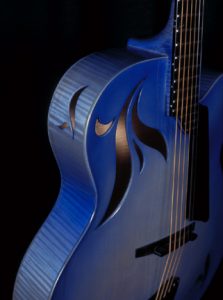 He is highly intuitive and a veteran innovator. In 1982, Benedetto led the movement to strip away unnecessary adornment (inlays, bindings, etc.) to concentrate on the acoustic voice of the archtop guitar. A master of restraint, this “less is more” mindset produced the simple and elegant La Venezia model and the exquisite La Cremona Azzurra and Renaissance Series. He was the first of the modern makers to use a solid ebony tailpiece, uniquely fastened to the guitar with a cello tail adjuster. Likewise, he was the first to use exotic wood veneers on the headstock and pioneered the use of violin-pigments to shade his guitars. His “honey blonde” finish is now widely used within the guitar industry worldwide.

In 1994 he authored the landmark book, Making an Archtop Guitar, and followed that with his 1996 instructional video, Archtop

Guitar Design & Construction. Profiled extensively in books and magazines, his legendary guitars appear on countless recordings, instructional books, videos, TV programs, film and television soundtracks, as well as at concerts, museums and jazz festivals worldwide. His guitars are renowned for their tonal balance, ease of playing and highly cultivated sense of style.

A two-hour documentary, BENEDETTO: BODY and SOUL – A Portrait of Master Guitarmaker Robert Benedetto, including a complete biography, interviews with family, friends, players and industry professionals, as well as archtop guitar construction/innovations, was produced in 2004 by William Doyle.  (MEL BAY 20883DVD) 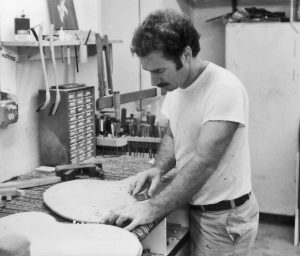 In 2018, coinciding with his 50th Anniversary, he released a 2nd Edition of Making an Archtop Guitar (Centerstream Publishing/Hal Leonard).