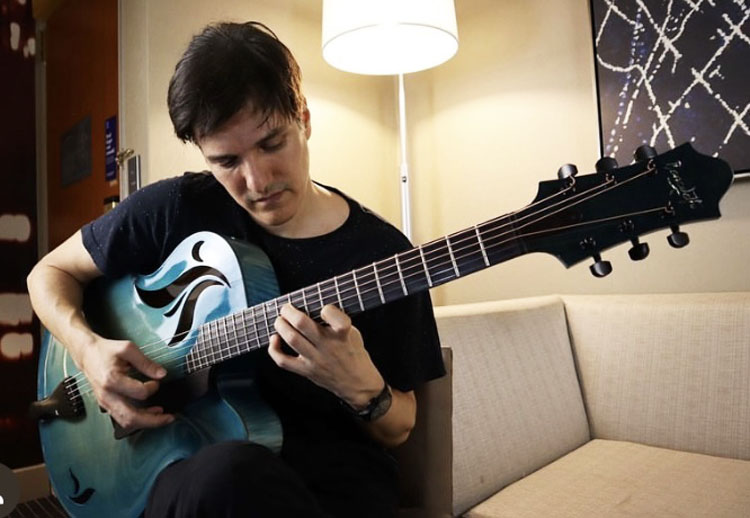 Bob Benedetto’s 1996 masterpiece archtop guitar, “La Cremona Azzurra”, the Blue Cremona, is one of the most beautiful and marvellous pieces of art I have ever seen. Granted, as the curator of the “Benedetto Guitars Archives Collection”, tasked with preserving the Benedetto ́s legacy, I might be biased. Every instrument in the Blue Guitars Collection, comprised of twenty-two of the most impressive and beautiful guitars in the world, is a marvel on its own.

To me though, The Blue Cremona has a special appeal. Striking in appearance, featuring the bold and unique floral sound openings and the amazing blue colour Scott Chinery specifically requested from all the makers involved, contrasted by Benedetto’s signature design of “less is more”, showing in the minimalist use of binding, inlay and other adornments, this guitar catches the eye immediately.

As evidenced by top tier players through the decades, ranging from Bucky Pizzarelli, Tal Farlow, Howard Alden, Jimmy Bruno and Martin Taylor to today’s greats like Ted Ludwig and Chico Pinheiro, among many others, La Cremona Azzurra leaves a lasting impression on players and listeners alike. As one of the musicians recently stated: “I have to say…I love this guitar!”

La Cremona Azzurra is part of the legendary “Blue Guitars Collection”, devised by entrepreneur and guitar collector extraordinaire, Scott Chinery of Toms River, NJ, in 1995. A lot has been said about Mr. Chinery ́s generosity, his positivity and all the good he did for the makers of archtop guitars and the guitar collecting world in general. I’d only like to add, judging from the documents in the Benedetto Archives and interviews with the people involved with Scott, it’s all true.

Bob Benedetto experienced him as “enthusiastic and understanding…he was a very uniting force within our guitar making community.” Bob adds: ”He was a good guy.” After the patron ́s untimely passing, Bob wrote to his colleagues in the Guild of American Luthiers that “I can think of no individual who has had such a profound impact on our careers and lives as Scott Chinery.” So when said patron called on Bob Benedetto to be included in the Blue guitar project in late April or early May of 1995, he gladly agreed. Bob had been making archtop guitars for almost 30 years at this point, and just recently, in 1994, had made a great impact on guitar makers and interested audiences around the world by making his skills and accumulated knowledge available through his guitar makingcourses and his comprehensive book and video series, “Making an Archtop Guitar”. 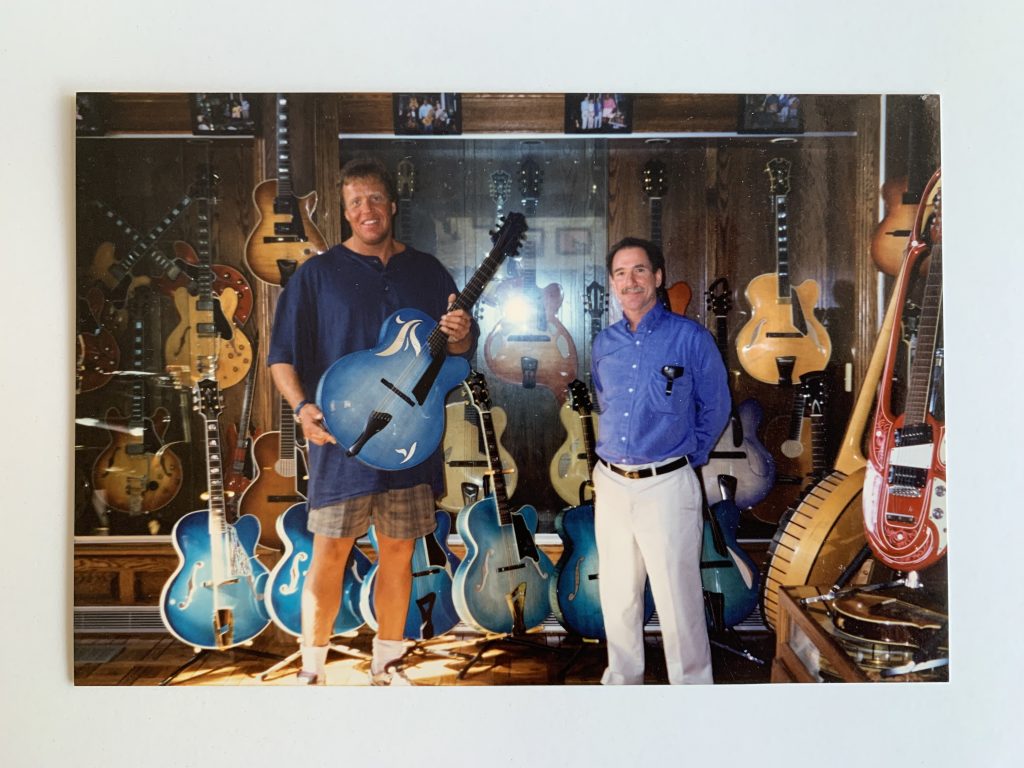 Benedetto, then based out of East Stroudsburg, PA, might have been at the high point of his craft when Scott Chinery ́s letter reached him, dated June 29th, 1995. In the letter, Scott laid out his project, stating “I’m putting together a collection of 18” arch-top guitars which represents the finest work by the world ́s greatest arch-top makers.” He only gave guidelines regarding the size of the lower bout and materials used, but left the construction, design and details to the individual maker. As a connecting element, to highlight the guitar “as a part of this specific collection of instruments”, Chinery requested the use of the now famous blue stain that defines the whole Blue Guitars Collection. At the time there had been voices, criticising the Blue Guitars project as a novelty, due to the emphasis on the color blue. So it is very important to stress that Chinery, in his letter to Benedetto and elsewhere, expressed his aiming to “highlight design and workmanship perspectives, not color.” He states this repeatedly, asking Benedetto to “interpret the guitar as you see it-and make the best possible instrument you can make.”

Bob Benedetto obliged, putting his best ability into designing the guitar. The unique floral soundholes were derived from a design that was created just a year earlier. Bob had made a unique nylon-string archtop guitar, named “Il Fiorentino”, or The Florentine, for his “Renaissance” series of guitars. In that instrument, the sound openings were considerably smaller, reminding me of olive leaves, and in a less technically complex location at the upper bout, but the concept was in the maker ́s mind.

The floral abalone inlay at the 12th fret, still a signature feature on today’s Benedetto instruments, was introduced in the early 1980s upon leaving the use of lavish inlay work. Inspired by his early supporter, Jazz great Chuck Wayne, Benedetto began to reduce the amount of materials and adornments on his guitars to a minimum; nothing that did not specifically enhance the playability or sound of the guitar was added to his builds. Floral motifs at the headstock of Benedetto ́s guitars can even be found dating back as far as the early 1970s. The distinct ebony tailpiece, utilizing the Sacconi tail adjuster, is another concept developed by Bob Benedetto, inspired by the great violin makers of the renaissance era, who were very influential to his work, that is now widely used among modern archtop makers. La Cremona Azzurra was built over the following months, with some more details regarding scale length and string spacing provided by Chinery in October 1995. Being aware that archtop guitars tend to strongly project what is played, but away from the player, he also requested sound openings on the upper bout, intended to better relay the instrument ́s sound to the player.

By April 1996 the guitar was finished. Bob Benedetto delivered a statement at the time, writing that La Cremona Azzurra “certainly […] was one of the most unique instruments I ́ve made to date. The unusual sound openings dictated a considerable variation in top and back plate graduations, as well as in the bracing configuration. It was a thought provoking and challenging experience. Interestingly, what I feel to be the most profound outcome was the camaraderie which I feel overshadowed the obvious competition. Bravo Scott!”

In today’s hindsight Benedetto remembers the amount of work tied to the instrument ́s design, but in his usual humble fashion he states “the greatest challenge making [the] guitar was achieving that particular shade of blue…I know it was for me!” Bob tends to be very practical and down to earth when talking about guitar construction. In our interviews, when listening to him, it seems like making some of the world ́s most highly regarded archtop guitars is not particularly complicated. Bob is just always building the best guitar possible, which is what he was doing since cutting a few inches off of his mother’s broomstick or taking woodscraps from under his father ́s workbench to carve miniature guitars as a boy.

La Cremona Azzurra, The Blue Cremona, was delivered personally, in a white Calton hardshell case with black lining, by Cindy and Bob Benedetto. They presented the guitar to Scott Chinery in his beautiful home in Toms River, NJ, on April 18th 1996. A series of pictures can be found in the Benedetto Archives, taken at the occasion, showing Scott Chinery holding the 18” guitar, looking smaller in his hands. He is flanked by the proud Bob Benedetto and the curator of the Chinery Collection, Mike Carey. In the last picture, Scott holds the guitar on his knee, playing it, a beaming smile on his face. In a fax message Chinery sent to the Benedettos in May 1996 he writes “I want you to know that Bob ́s guitar has given me incredible joy […]. I feel confident that I have a unique and comprehensive perspective concerning the universe of guitars, and I feel even more confident in saying that “Bob Benedetto ́s genius is unparalleled in the history of guitar making.” Just having the opportunity to know you both is a great, great honor.” I can only agree. Over the next years , the ensuing publicity and attention given to the Blue Guitars Collection by the National Museum of American History at the Smithsonian Institution, newspapers, TV stations, guitar shows, guitar makers, players and enthusiasts around the world was the well deserved reward for ScottChinery ́s marvelous undertaking.

Seeing the Blue Guitars Collection in the center of public attention again, 25 years after its first heyday, is a wonderful and satisfying experience. Cindy and Bob Benedetto and I, on behalf of the Benedetto Guitars Archives, are grateful and delighted to be a part of it. After the guitar ́s completion Bob Benedetto wrote this statement, that, in the light of Scott Chinery ́s passing, rings true even more: “I think the Blue Guitar project is a landmark statement by Scott Chinery. He obviously has loved the instrument his entire life, as so many of us do […]. Most importantly, he knows that the Blue Collection is now part of American culture and history. It will be here long after we are all gone. No doubt this gives him great satisfaction knowing that he is responsible for leaving such a treasure for future generations to admire and enjoy, and in so doing, has elevated the art of archtop guitarmaking to a new level.”

(reprinted from The Archtop Foundation’s The Blue Guitars website)

Photographer and videographer Michael Watts for the Blue Guitars (on Instagram) 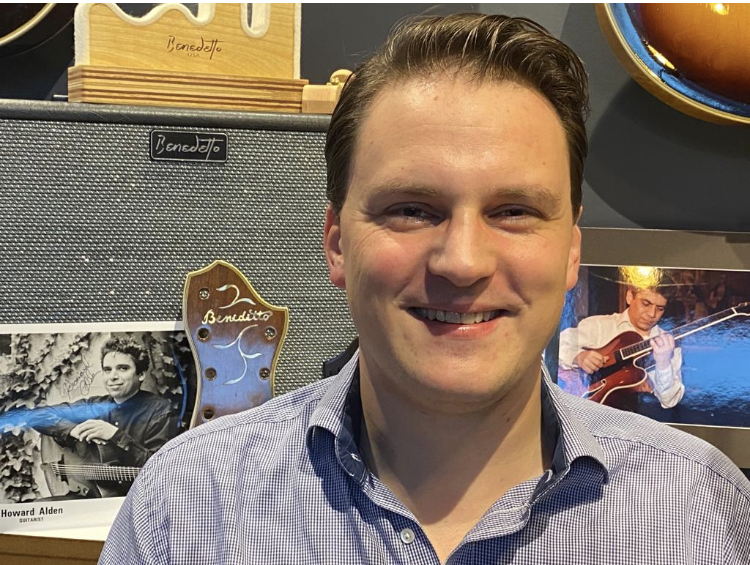 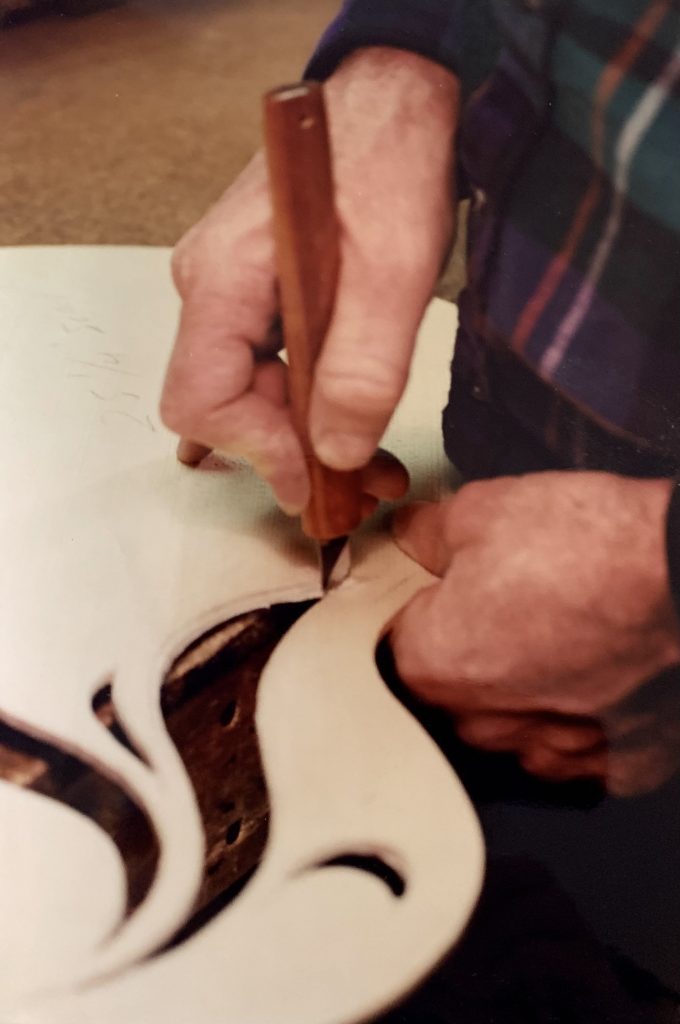 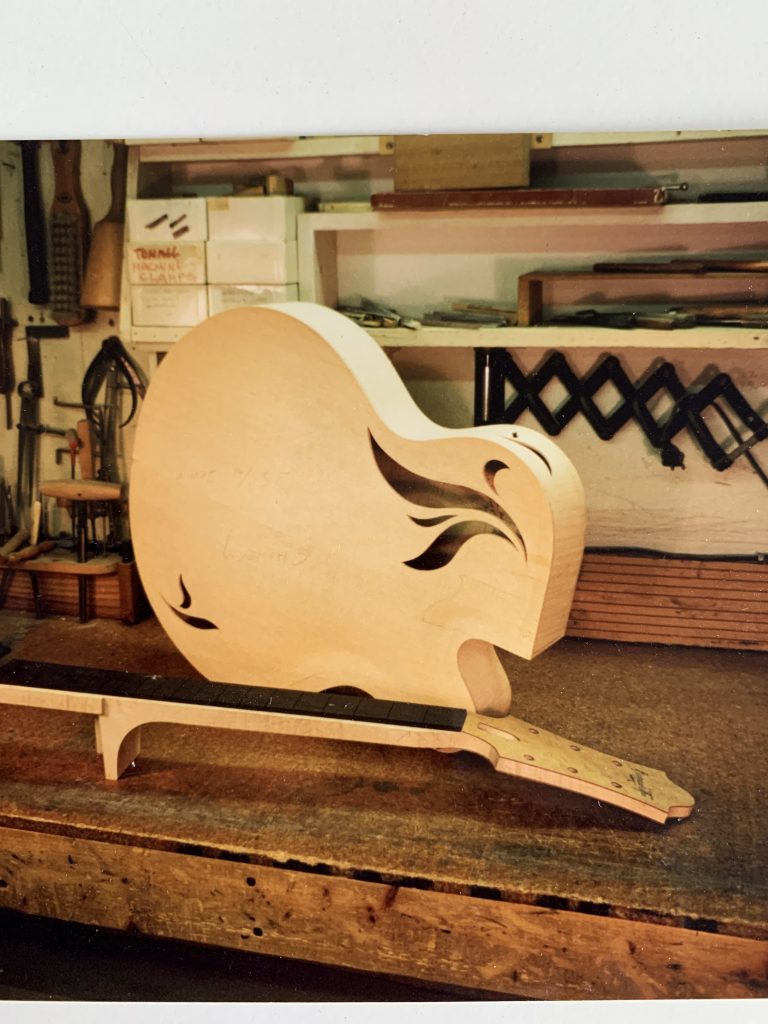 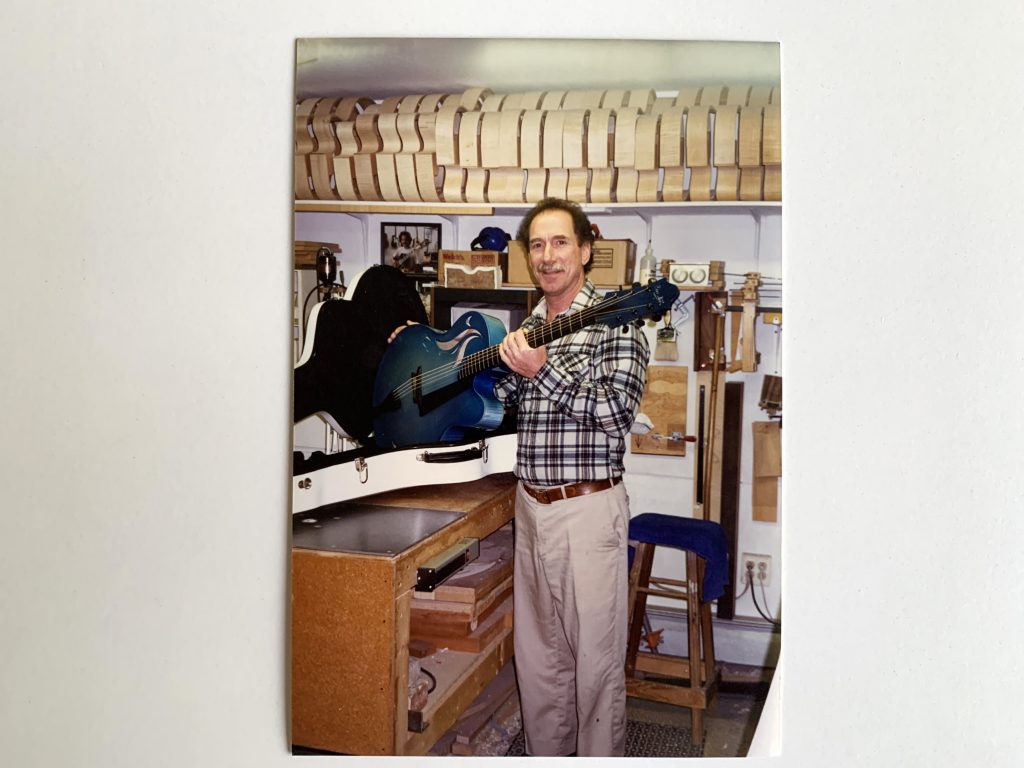