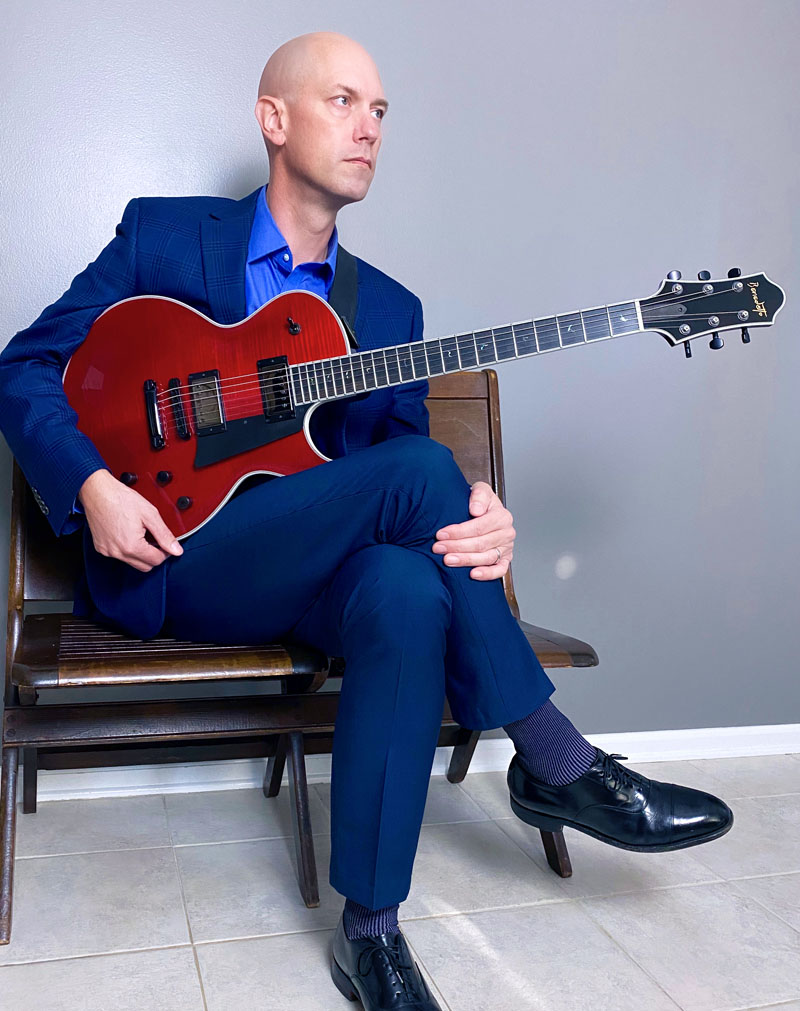 SHAWN PURCELL is a guitarist, arranger, composer and adjunct professor of jazz studies at George Mason University. He has served on the faculty at Towson University, Middle Tennessee State University and was a Visiting Lecturer in Jazz Studies at Indiana University, Bloomington. He earned his DMA in Jazz Performance from the University of Illinois at Urbana-Champaign. From 1996-2004, he was the guitarist with The Airmen of Note and is currently with the US Navy Band “Commodores” jazz ensemble.

Per Shawn: The new guitar is AWESOME!  I only had it for about a week when we recorded, but it was so comfortable

right out of the box I felt really confident playing it!!! THANK YOU again

SP: Yes!  The Jazz Education Network Conference (#jenx2021) is being held “virtually” this year. The people at JEN have done an extraordinary job making this year’s conference feel like it has in the past, and we are fortunate to be a part of this incredible group of jazz educators and musicians.  A special thanks to Lou Fischer, Sharon Burch and all of the people at JEN for the opportunity. (Click here to see Full Conference Schedule) 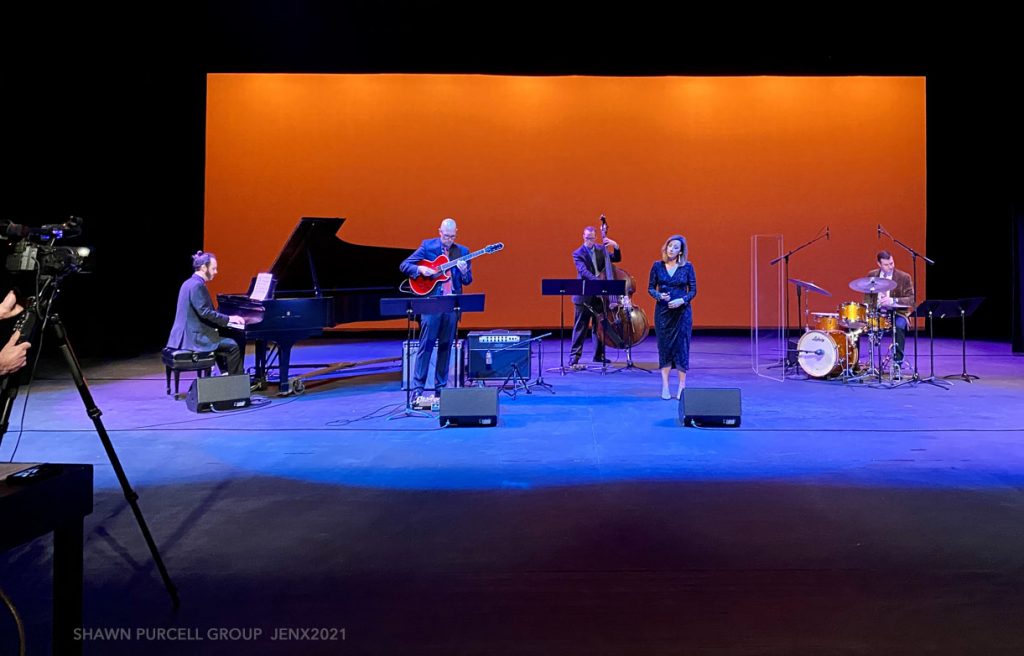 My group was fortunate to be chosen for a performance this year.  I have performed with numerous groups at many JEN conferences over the last 10 years, but never with my own group. The 52 minute set airs on January 7, 2021, 4 pm, as part of the conference. It was recorded as a video concert at George Mason University on the beautiful Center for the Arts stage.  The band is:  Darden Purcell – Voice, Luis Hernandez – Tenor Saxophone, Todd Simon – Piano, Regan Brough – Bass and Kevin McDonald – Drums.

All the musicians, except for Kevin, were on my newest record, “Symmetricity,” so it’s a group we feel quite comfortable playing with and these are some of our favorite musicians on the planet. Darden, Regan, Kevin and I are also jazz faculty at George Mason University, so there’s also a strong tie to the University in this performance as well which correlates to the educational aspect and mission of the Jazz Education Network (JEN).  It can be quite challenging to recreate the feel of a live concert performance when you are playing on a large stage to an empty 2,000 seat hall. But, with the help of the great folks at the Center for the Arts, Scott Nurmi (Mojo Factory Productions, who did all 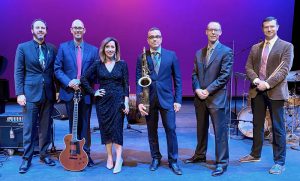 of the video footage/editing/etc.) and these wonderful musicians, I think the viewers will totally get the look, sound and feel of a live jazz performance.  Excited for people to see and hear it!

CB: How did you get the job at the Airmen of Note? By the way, per Bob: “My first recollection is when the Airmen of Note did a concert at my high school in New Jersey.  I was a senior at the time.  My former HS music teacher, Steve Torick, a former air force band leader, was beaming.  The guitarist was Rick Whitehead playing a big Super 400.  That was the first time I watched and heard live a 1st class jazz guitar player.” 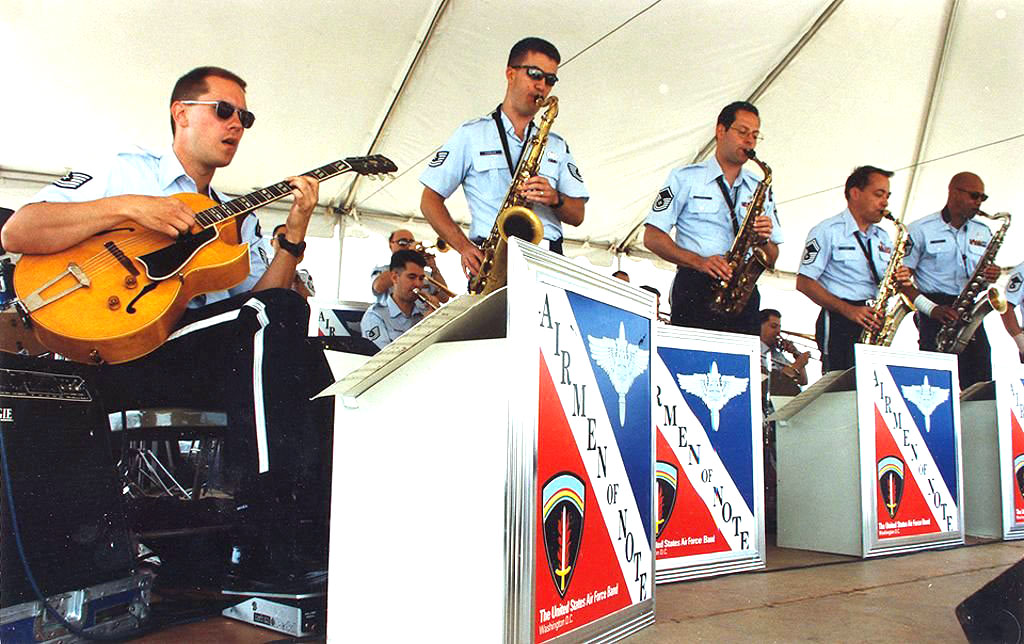 SP: Wow, that is a great story!  Rick Whitehead is such a marvelous guitarist; he was two guitarists before I joined the Airmen of Note. (I actually replaced Wayne Wilkinson, another AMAZING player and Benedetto artist, in October 1996.) I believe Wayne replaced Rick in 1991.  I found out about the Airmen of Note jazz guitar position through the musician’s union newspaper.  I had just returned to Pittsburgh after touring for two years as the guitarist with the Ringling Bros. & Barnum and Bailey circus. I initially disregarded the advertisement as I had never considered a gig in the military, but at the prodding of my late grandfather, a professional musician who spent a few years in the Navy Band during WWII, I mailed a cassette of some bootleg playing examples. I still remember receiving a call from Wayne Wilkinson letting me know that he really enjoyed my playing and that he wanted to extend an invitation for a live audition.  I also remember how great the band sounded on my audition; wow!  I don’t remember much about the audition because of I was fairly nervous, but, at the end of the day, the bandleader at the time, Peter BarenBregge, offered me the gig.  I was 24 at the time, and ecstatic at the prospect of moving to Washington, D.C. I was so excited and honored to join a group with such a rich and storied history.  I played in the band for just under eight years and during that time I had the privilege of playing jazz festivals and concert halls while touring throughout the United States. I also got to perform and record in multiple countries throughout the world including Germany, Belgium, Italy, Luxembourg, Oman, Bahrein, United Arab Emirates, and others. I am currently the jazz guitar and jazz arranging professor at George Mason University, right outside Washington, D.C., and Rick Whitehead is on faculty at Mason as well. Rick sounds as great as ever!

CB: You are currently a member of the Navy Commodores; tell us about that.

SP: The “Commodores” are the Premier Jazz Ensemble of the US Navy, based in Washington, DC.  It’s the “Airmen of Note” of the Navy! We perform about 80-90 concerts a year as the full band, and then I do another 15-20 smaller, combo or solo guitar type gigs a year as part of the job. I joined the “Commodores” in August 2013, replacing a wonderful guitarist, Gary Malvaso.

The band is filled with amazing, world-class musicians that have graduated from some of the top schools in the country and have become successful musicians before joining.  Most members join a little later in life after already having professional careers, so they also bring all of this incredible experience and knowledge to the group. The military jazz bands, as well as university teaching gigs, are great options for the professional musician and I encourage my students to consider these career paths as they branch out into their own careers.

CB: Your wife, Darden Purcell, is also a musician.

SP: My wife, Darden, a wonderful jazz vocalist, has been the Director of Jazz Studies at George Mason University in Fairfax, VA for the past six years. I met her in 1999 when we were both in the Air Force band.

CB: Did you start out playing standards?

SP: I actually started out playing heavy metal and hard rock!  I grew up in the mid-80s and my earliest heroes were players like Steve Vai, Eddie Van Halen, Randy Rhoads, Jimmy Page, etc.  My dream was to be a rock star!  My father, Randy Purcell, was a jazz trombonist so I grew up hearing a lot of great jazz artists and records at an early age. But, as a teenager, I was fully embracing all of the virtuoso rock guitarists that were on the scene.

SP: Oh, that’s a tough question.  I’m not sure if this is my absolute favorite, but I’ve been working on Bill Evans’ “Turn Out The Stars” quite a bit lately.  It’s one of the deeper tunes, harmonically speaking, that I’ve spent time on.  It’s so harmonically complex but still has a strong logic to the movement, and the melody is beautifully constructed.  Evans’ motivic genius is inspiring.  My favorite version right now is from  “Some Other Time,” one of my all-time favorite Bill Evans records.  Another tune I LOVE, and I don’t hear a lot is “If You Never Come to Me,” composed by Antonio Carlos Jobim.  That’s another tune that is beautifully constructed, yet quite challenging to play in a musically meaningful way.

CB: What are the Guitars and other Equipment do you use?

SP: For guitars, my main ax now is my brand new Custom Pat Martino Signature Guitar!  It was delivered just before Thanksgiving, and it’s amazing. The JENX 2021 concert was  the first “live performance” with the new guitar.

For amplifiers I’m pretty much in the Fender tube amp camp. I play through an old 1965 Fender Super Reverb, 1969 Fender Twin Reverb (refurbished by Tomas Jackson), 1964 Fender Vibroverb replica (that I built from a 1969 Bandmaster Reverb Chassis), 1955 Fender Deluxe, 1970s Polytone Mini-Brute III, and a 2000s Mesa Boogie Lonestar Classic. Too many effects to list, and I probably use them too much! 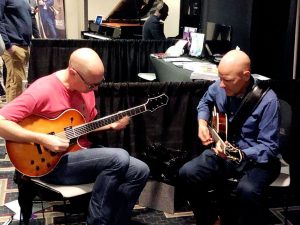 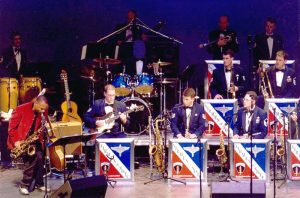 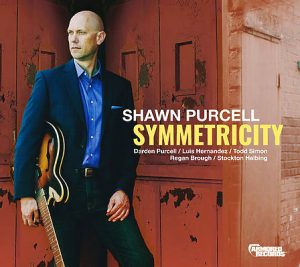 Purcell’s first recording as a leader, Symmetricity, showcases his fluid guitar technique and “take no prisoners” approach to improvisation and a finely-honed compositional style that blends straight-ahead jazz with a modern aesthetic.

CB: Was there a jazz guitar album that had the greatest impact on you?

CB: Who are jazz guitarists you do or did admire?

SP: Wow, how much space do we have?  I’ll list some of the biggest influences:

Pat Martino was really the guitarist that changed everything for me.  When I was a freshman in college, one of my teachers gave me a “mix-tape” of a bunch of Martino solos.  I think the examples were the solos transcribed by Steve Khan for the Martino Early Years book.  I was completely blown away by Pat’s time-feel, lines, tone, sound, articulation, energy, rhythmic intensity, etc.  It was like a “jazz guitar freight train” coming through!  I still get that same feeling when I listen to Pat! 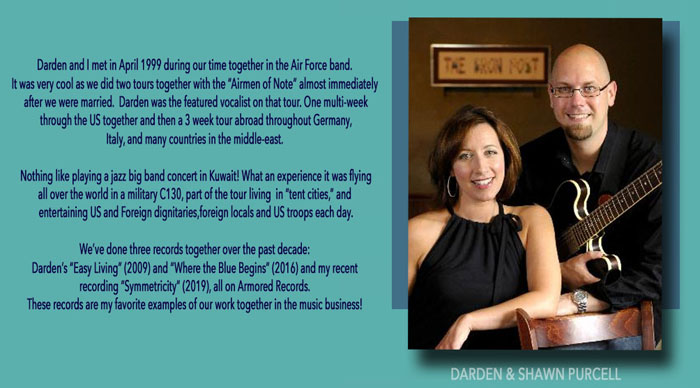 CB: Did you play another instrument before guitar? 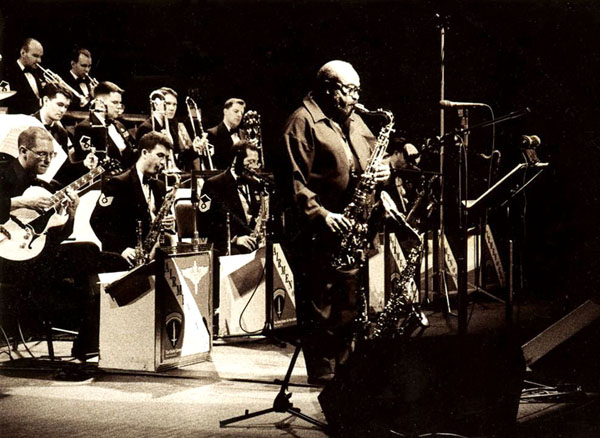 Airmen of Note with James Moody, George Mason University Center for the Arts

SP: I grew up in a family of professional musicians, so I began Suzuki at the age of 3, then piano lessons followed at the age of 5.  My mom was wonderful; she would sit and listen to me practice (I’m sure I sounded absolutely terrible).  At the age of 12, I really wanted to start playing guitar.  My parents agreed on guitar lessons but I had to continue studying piano. I was definitely not into the piano lessons at that point but desperately wanted a guitar!  Now I wish I would have taken piano more seriously as I use it for almost all of my composing and arranging.  But, at 12 years of age, to me guitar was WAY cooler; still is!

CB: You’re doing a lot of teaching these days; do you have any advice for younger up-and-coming guitarists?

SP: Well, the first thing I would say is when you can save enough money, buy a Benedetto! 🙂  It took me way too long to get one, but better late than never.  One of my students at George Mason University is playing a killer Bravo model already, and now I’m working on the other players in my studio. The older I get, I understand fully the value of investing in the best quality gear early on.

CB: Thanks so much, Shawn, for sharing all this; insightful and heartfelt! Anything you want to add?

SP: Yes, coming in March 2021… delighted to be on Washington D.C. based trombonist Ben Patterson’s upcoming release, “Push the Limits,” on Origin Records. Thank you! 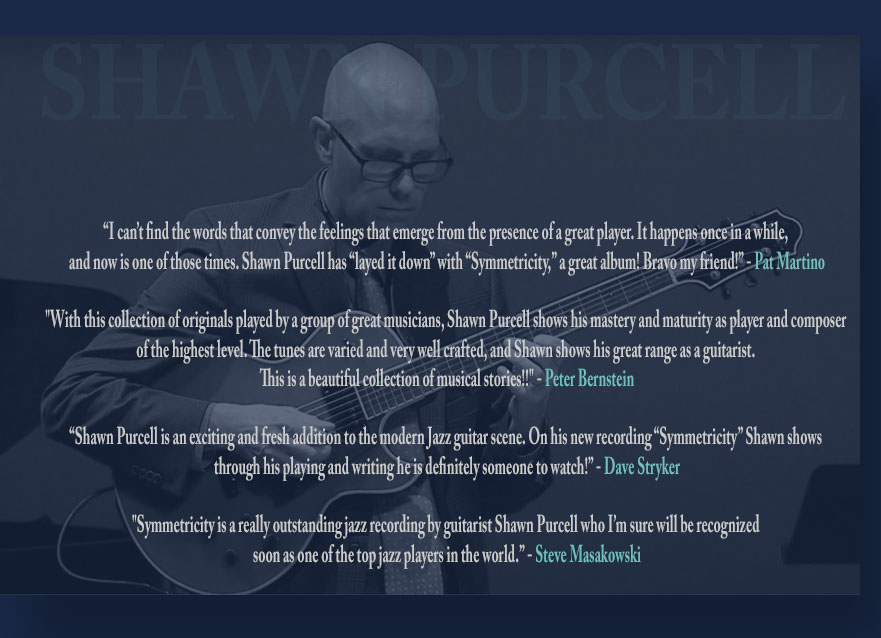 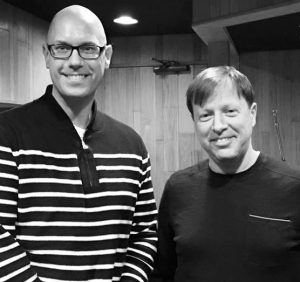 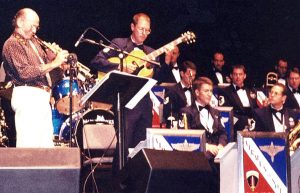 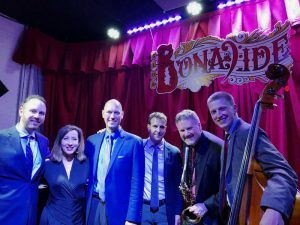